One thing leads to another.  Yesterday one of our young chicks flew the coop and we had to corral her back in.  As I walked along the fence line to head her off, I noticed a swarm of bees clinging to last year’s morning glory vines.  My husband checked one of his two hives, and sure enough, the swarm contained “his” bees.  If the chick had not escaped, I would not have seen the swarm. 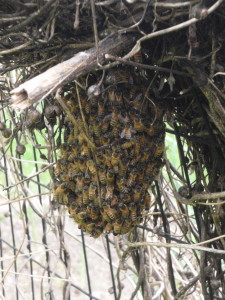 our swarm of bees

Bee swarms send out scouts to find a permanent location, and then swarm off to begin their new home.  Typically, bees swarm in May and June, once the hive has become overly populated – too many bees for too small a space – or when the existing queen is nearing the end of her reign.  The workers sense this, begin preparing a few brood cells with royal jelly, and when a new queen makes her way to the fore, she leaves the hive with about half of the hive’s bees.  According to Edwin Way Teale in his book, The Golden Throng, this is a euphoric time in the hive.

The machinelike routine of the hive is forgotten.  Caution, common sense, all the virtues of their everyday lives, are ignored. A holiday spirit sweeps over the insects.  They gorge themselves with honey. They seem drunk with joy, delirious at the approach of a great adventure.  The frugal, provident, hard-working bees are seemingly caught up in a mad, reckless mood of abandon.  They hazard all in one rash gamble with fate.

A time of excitement, of adventure, of dancing and freedom, is at hand.  This is the one playday, the only Sunday know in the world of bees. 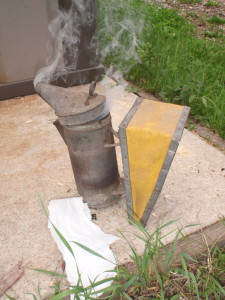 Teale also states, “It is a hardened beekeeper who can remain calm at such a moment.” M quickly moved into action and prepared to remove the swarm into a ‘nuc’ box by first smoking them — directing bees’ attention to the uptake of honey (rather than defending the nest against assailants) in preparation for fleeing the hive from, say, an approaching forest fire — and then slipping them into the nuc box.  It was exciting to watch from afar, as the bees did indeed swarm again around M’s wax foundation and frames, which he put into the nuc box.  Since the queen and a large part of her “court” moved to the new box, her other workers and drones have followed, and this morning finds the entire hive apparently in the nuc box.  Tomorrow morning, M will move them to a larger hive for their new, more permanent home. 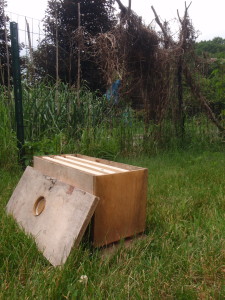 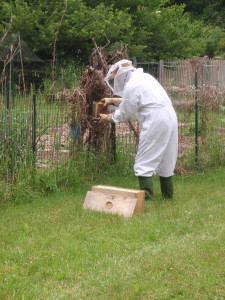 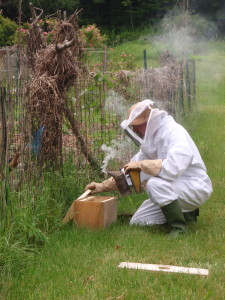 transferring the swarm to the nuc