Perhaps a copy of Flora’s Dictionary would have been found on Emily Dickinson’s bookshelf, posits the scholar Judith Farr.  Dickinson’s letters sent to family and friends often contained a flower or leaf, and she wanted the recipient to decode its meaning.

In 1829, Elizabeth Washington Gamble Wirt (1784-1857) published her floral dictionary anonymously, ‘by a Lady.’  Wirt’s book not only includes quotes by prominent poets and writers for each plant, but also chapters on the “Structure of Plants,” ‘Structure of Flowers,” as well as a “Sketch on the Life of Linnaeus,” and a thorough chapter called “Notes” with the history of each flower.  The popularity of her book is revealed in the number of printings:  reprinted both in 1831 and 1833; in 1835, her name was finally revealed as “Mrs. E. W. Wirt of Virginia;” more editions followed in 1837; and finally, three editions in 1855 with the last edition complete with elaborately colored plates, the first one of its type in the United States.

One may see copies of Wirt’s book in the elegant exhibition Gardening by the Book: Celebrating 100 years of the Garden Club of America currently on view at the Grolier Club.   The book may be downloaded in its digitized form from Google. 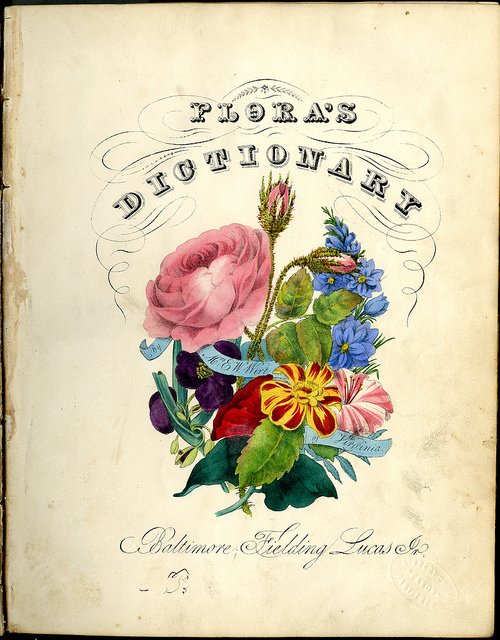 If I were to tuck a flower in a letter today, my choices currently blooming from the garden (with attribution by Wirt) would be: