Sunday marks the beginning of ‘Daylight Savings Time.’ DST is an early twentieth century concept supposedly implemented to use electricity more efficiently, to utilize more of the natural light and otherwise encourage more daylight activities; just how it does these things is the subject of some controversy. What most of us would agree on is that it is disruptive.

Thankfully, we are not ‘in the dark’ whilst M is deep into a major home project. For this particular one, involving the complete re-cladding of one portion of our home, power to the house was removed and re-routed from the garage to run back to the house. We still have enough amperage to run the refrigerator, lights, furnace, and our computers but not the clothes dryer and the dehumidifier. Furthermore, we have to monitor what is running and not over-load the new power source; i.e., we turn off some lights and then run the washing machine, but we can’t use the toaster while doing a load of clothes. No big deal.

Our monitoring of lights, heat and electricity has left me pondering methods of yore most likely sparked by my first foray into candle-making a few weeks ago. My friend Jody has dipped thousands of candles, being the former proprietoress of Wax Poetic. She taught me the multi-step process: first, cut the wicks to the same length; attach six wick strands to one piece of wood; dip each group into the warm wax; hang and let dry; and then continue dipping until the desired size. This process is not much different than the one employed by the colonial housewife described by Alice Morse Earle in Home Life in Colonial Days:

“Every thrifty housewife in America saved her penny as in England. The making of the winter’s stock of candles was the special autumnal household duty, and a hard one too, for the great kettles were tiresome and heavy to handle. An early hour found the work well under way. A good fire was started in the kitchen fireplace under two vast kettles, each two feet, perhaps, in diameter, which were hung on trammels from the lug-pole or crane and half filled with boiling water and melted tallow, which had two scaldings and scimmings. At the end of the kitchen or lean-to, two large poles were laid from chair to chair or stool to stool. Across these poles were placed at regular intervals, like the rounds of a ladder, smaller sticks about fifteen or eighteen inches long, called candle-rods. These poles were saved from year to year, either in the garret or up on the kitchen beams.” 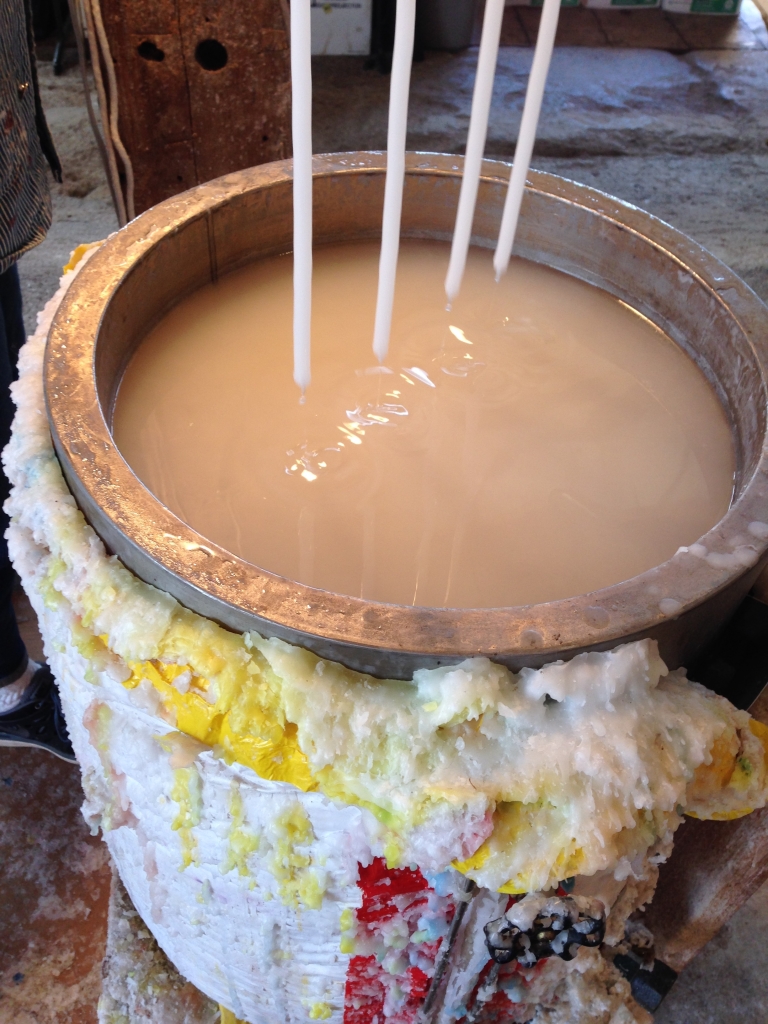 Tallow, from “…deer suet, moose fat, bear’s grease…” as well as “…every particle of grease rescued from pot liquor, or fat from meat…” was used to make candles. Beekeepers saved the wax from their hives, for this wax did not smoke as much as tallow. Earle reports that wicks were made from “…spun hemp or tow, or of cotton; from milkweed.” Over the past few weeks, the milkweed pods on our land have been spreading their seeds and their silk-down and have given me pause, for I wondered what would have been done with this resource. Today, in the daylight, I will gather some silk-down and try my hand at spinning wicks to be used for the next batch of candles in my own effort to make light.