On the farm, we are in the midst of seasonal chores—weeding the garden; freezing herbs for winter; making and freezing garlic scape pesto; tending the chickens and selling their eggs. We just finished harvesting the strawberries, and the asparagus, now gone to flower, is buzzing with honeybees foraging for pollen.  These chores, in theory, are not different than the ones undertaken by the women of the Chandler family in the frontier settlement of New Roxbury, CT in the 1690s (now Woodstock, CT).

“Elizabeth and her daughters would have attended to the countless chores and responsibilities of the family’s day-to-day survival:  looking after the livestock and the kitchen and medicinal gardens; foraging in the fields and forest for plants and fruit; making soap, candles and cloth; tending fires; washing clothes; cooking meals; and cleaning house.”

Of course, we have the luxury of electricity and modern purveyors to aid us in our chores and provision gathering.

A recent story on NPR tells of the return of the butter churn and its elevated status as an artisanal food. Families gather to ‘churn butter’ and find that it is not as easy at it would seem.  Alice Morse Earle in her book Home Life in Colonial Days states that “few New England families in the seventeenth century owned churns.”  However, “As cattle increased the duties of the dairy grew, and soon were never-ceasing and ever-tiring.  The care of cream and making of butter was in the eighteenth century the duty of every good wife and dame in the country, and usually in the town.” 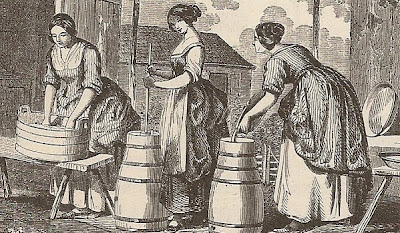 As of yet, we don’t have the backyard family cow and the associated chores of twice a day milking and  butter to churn, but we’ve been researching and contemplating this addition.

[NOTE:  This Thursday July 11th, Coughlin is the first speaker for the 2013 Summer Lecture Series, “Through Her Eyes, In Her Words: The Lives and Writings of Three Colonial Women” held at Garonzik Auditorium, Koch Science Center, Deerfield Academy at 7:30.  The lecture series is free.]