Set your sails for Portsmouth, NH this weekend and plan to be in attendance at the historic John Paul Jones house for the 11am talk– When a Bed Sheet Cost More than a Cow:  Textiles in the Inventory of Urusla Cutt.

Madame Ursula Cutt, the former wife of John Cutt, President of the Province of New Hampshire, was murdered on her Portsmouth farm by the Abenaki Indians in 1694.  The customary probate inventory “allows us to rummage among her belongings, at least in imagination” reports Laurel Thatcher Ulrich in her book Good Wives.   Ulrich surmises that Cutt was a ‘gentlewoman’ due to the list of items she owned, including:  “fine wrought Coverings for Cushions not made up,” “wearing linen,” and “remnants of old silk and several small swatches of silver lace.”  The Saturday talk will “examine the types of household linens and clothing she owned, addressing which were imported and which were made in New Hampshire.” 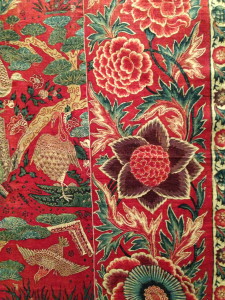 detail of cotton ‘Palampore’ made in India, first quarter of 18th century

Perhaps your next port of call will be ‘New Amsterdam’ to view Interwoven Globe:  The Worldwide Textile Trade 1500-1800 at the Metropolitan Museum of Art (until January 5, 2014).  The fascinating and breathtaking exhibition of over 150 textiles traces the ‘cloth’ trade around the globe via maritime routes.  Splendors of cross-pollination are evident in the tendrils that are intertwined on the gallery walls on numerous Palampores (large pieces of cloth typically used for either a wall hanging or bed/table cover).  The last gallery is filled with examples of cloth imported into the Colonies from the East India Company.  The wall text states, “Readily available in both large city shops and small country stores, these so-called East India Goods also served as an important source of inspiration for decorative textiles made in North America.” Perhaps Cutt purchased some intricate East Indian cotton and placed it in her chest of drawers, later to be inventoried and left for us to “rummage”.

For a thorough examination of the murder of Cutt, reference the recent article by the historian and author J. Dennis Robinson: