Glimpsing lacelike spider webs, fluffy cattails and silky milkweed on my morning walks spurred me to re-examine strands of fiber and sparked a series of work. The sculptures in sky strainer series are made from my handspun wool in the knotless netting technique. Some of the pieces are nestled in tree branches or suspended from the ceiling, as one might glimpse a light orb or a spider web out of the corner of one’s eye. 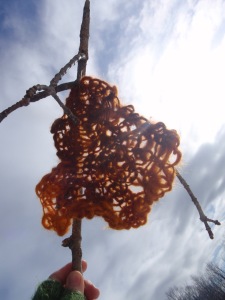 In his book, Primitive Scandinavian Textiles in Knotless Netting, Odd Nordland examines ancient textiles, including the beautiful milk strainers made from cow tail hairs gathered in the fall after the cows no longer needed their long tails to ward off flies. He further examines the many uses of the cow: for food (both meat to eat and milk to drink, often out of the horn of the cow), and for skin and sinews (providing material for sewing, often with needles carved from cow bones).

It is not only the magnificence of the lacelike milk strainers that influences my series, but also the industriousness of the farmers that used them. Early farmers depended upon their cattle in a wide variety of substantive ways. These cows were not being raised on industrial cattle farms and being fed corn and antibiotics, but instead were eating native grasses under the stars and sky. 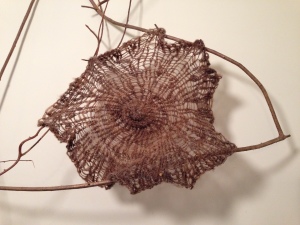 In our over-mechanized society, we can draw inspiration from the ancients who exemplified such resourcefulness and directness in their daily routines. Be it from the turning of the spinning wheel to make the yarn, or the slow methodical movement of the needle twining through the loops, the sky strainers hearken to an earlier age and push forward.

Note: sky strainer #6 is currently on view until January 31, 2015, in the exhibition Circle Round at the KNOX Gallery, Monterey, MA. https://www.facebook.com/knoxgallery?sk=wall