Tomorrow, Sotheby’s will auction the first book printed in the colonies—the Bay Psalm Book.  The Old South Church in Boston is selling one of its two copies, and the estimate for the book is $15,000,000-$30,000,000—representing the highest amount ever to be paid for a book. 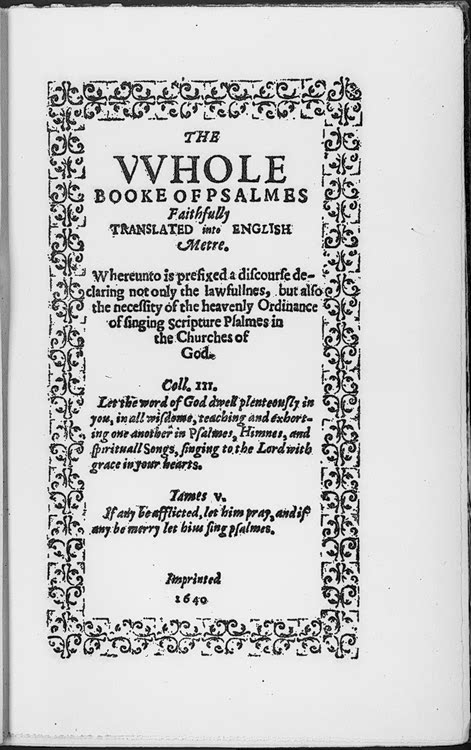 The Whole Book Psalmes. Image from Library of Congress

The Whole Book of Psalmes Faithfully Translated into English Metre was printed by The Cambridge Press in 1640.  The widowed Mrs. Elizabeth Glover (her husband Jose Glover died on board the ship traveling from England to the Colony of Massachusetts) established the first printing press in Cambridge, MA in 1638.  She ran the press as a sole proprietor for three years before marrying the first president of Harvard, Henry Dunster, in 1641.  Mrs. Glover died in 1643, and Dunster then ran the Press until he sold it to Harvard in 1654.

Mrs. Glover did not physically operate the press, but rather her indentured servant Stephan Day.  According to Sotheby’s, he functioned as a “compositor and pressman,” perhaps along with his son Matthew.  The Cambridge Press printed 1,700 copies of the Bay Psalm Book and only 11 are known to survive to this day. [For an extensive examination of the Bay Psalm Book, please refer to: http://www.sothebys.com/en/auctions/2013/the-bay-psalm-book-sale-n09039/The-Bay-Psalm-Book/2013/10/printing-the-bay-psa.html ]

Mrs. Glover’s Press not only printed the first book in the Colonies, but it printed the first ‘translated’ book.  The Puritans painstakingly translated the Book of Psalms from the Hebrew Scriptures so that the psalms could be sung in church.  The preface of the Bay Psalm Book, attributed to Richard Mather (1596-1669), describes their sensitive approach:

“….For we have respected rather a plain translation than to smooth our verses with the sweetness of any paraphrase:  and so have attended conscience rather than elegance, fidelity rather than poetry, in translating the Hebrew words into English language and David’s poetry into English meter; that so we may sing in Sion the Lord’s songs of praise according to His own will—until He takes us from hence, and wipe away our tears, and bid us to enter into our Master’s joy to sing eternal halleluiahs.”

My mother took us to church every Sunday, and I did not always go willingly, and certainly did not want to wear the white gloves at her insistence.  However, I do recall being transported by the words and meters of the sung Psalms.  I wonder who will hold and sing from the Bay Psalm Book come Wednesday morning.

[Update—The Bay Psalm Book sold for $14,165,000.00. According to the BBC News the purchaser is “US financier and philanthropist David Rubenstein, who planned to loan it to libraries across the country.”]