‘Make hay while the sun shines’ is apt for many reasons and on many levels. Last week, it felt like summer here with temperatures approaching 90 degrees during the afternoons. And, indeed, hay was being made in the fields. Timely, for this week finds the temperatures lower and the days laced with rain and fog. If farmers cut their hay this week, it would either rot in the field or in the bales over time. 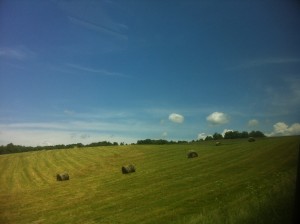 A few weeks ago, while reading the New York Times food section, the following caught my eye, “In Colonial days, New England farmhands pitched hay in the summer sun and slaked their thirst with a concoction called switchel, a mixture of vinegar, water and a sweetener, often molasses.”

I recalled hearing about “ales, beers, wines, ciders and spirits” on the May 1 edition of Fieldstone Common. Marian Pierre-Louis interviewed Corin Hirsch about her book The Forgotten Drinks of Colonial New England: From Flips & Rattle-Skulls to Switchel & Spruce Beer. Hirsch masterfully traces the Colonies’ history through beverages of time, intertwining political events, tavern keeping, customs and recipes. Drinks were seasonal and regional, as with the switchel, which was consumed mainly in Vermont on hot summer days. Vinegar was used in this drink to give it a refreshing, tangy twist, for it was hard to acquire citrus fruits. Recipes may be found in Hirsch’s book, including one for the ‘Flip’, reminiscent of eggnog with a smokey taste and made with “beer, rum, spices and eggs served warmed by plunging a poker from the fire” into the mug. Perhaps on a cold winter’s day, we will try a flip, but this summer, pitchers of switchel will grace our table.