For the past four years, we have been privileged to be part of a raw milk buying club.  A milk club does sound peculiar, but in order to avoid the stringent and misguided rules imposed by our state, we joined the ‘club’ and therefore circumnavigate some of the rules.  Raw milk is thought by some (agribusiness dairy farmers?) to be the cause of many ills, and some people are frightened off drinking it.  However, one recent study published in the Journal of Food Protection demonstrates that there are deaths due to “leafy green vegetables” and prescription drugs and none due to raw milk. 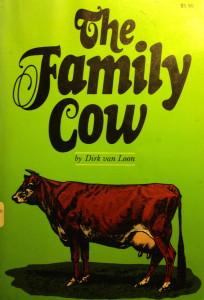 Our beloved farmer, after taking care of cows for more than thirty-two years, is moving and selling his 6 cows (a Jersey, three brown Swiss, and two rescued Holsteins).  M has always wanted a milking cow, recently attending a one-day workshop on the family cow, and saw this as an opportunity to purchase a cow to insure that we will continue to have good quality milk.  However, we don’t have the fences, the milking room, or other requirements at the moment to care for a cow.  And a single milking cow produces up to three gallons of milk a day.  While we love our fresh, raw milk, what in the world would we do with that much milk on a weekly basis?

If only I had been born three hundred years ago, my dowry might have included a cow, as Allegra di Bonaventura reports:

“……..eleven-year-old Molly Hempstead had probably dressed before light and tripped sleepily along the path from her father’s house to the barn to take the morning’s milk.  Although men could milk in a pinch, the English viewed this ancient rite, repeated every dawn and dusk as quintessential woman’s work.  Familiar female hands and tones soothe the cows, encouraging milk to flow.  English fathers typically included a healthy milking cow with a daughter’s marriage “portion” so that a young bride could provide milk and cheese for her family.  Although her own wedding day was years away, Molly was already adept at the work. The child had been trotting up and down the same path to milk for as along as she could remember. “