Do you keep a weather journal? Make notes when the hummingbirds arrive in the spring? Sketch and date the unfurling of the bloodroot along the forest trail?

For the past seven years, I flip open my “Record Book” and note the morning temperature as well as other memorable natural occurrences of the day. On February 10th, my husband noted that ten red-winged blackbirds appeared at our birdfeeder and asked if I thought this was unusual. My notes indicate that on February 22, 2016, red-winged blackbirds were at the feeder, and in 2014, on March 4th, we spotted them as well. These observations give us context for our slice of land. 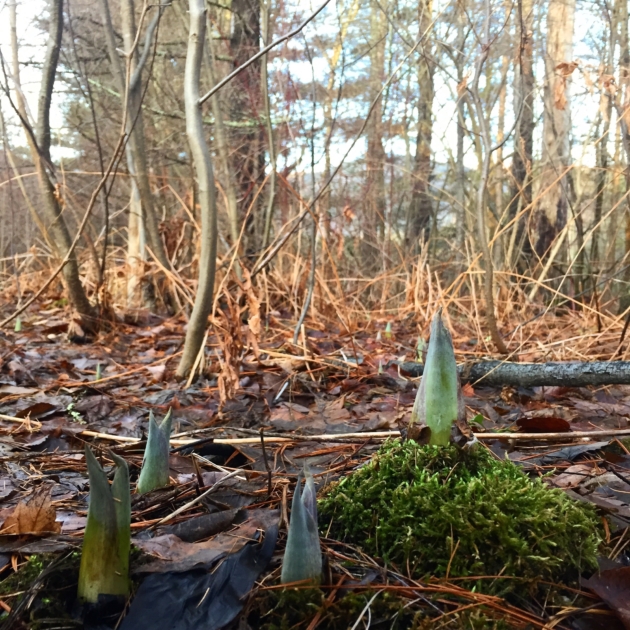 It seems of utmost importance now more than ever to participate in the natural world around us. Perhaps it is time to become part of Nature’s Notebook, sponsored by the USA National Phenology Network (USA-NPN). Webster’s Dictionary defines phenology as “the study of cyclic and seasonal natural phenomena, especially in relation to climate and plant life.” The USA-NPN notes:

“Phenology is a key component of life on earth.  Many birds time their nesting so that eggs hatch when insects are available to feed nestlings.  In turn, insect emergence is often synchronized with leafing out in their host plants. For many people, allergy season starts when particular flowers bloom—earlier flowering means earlier allergies.  Farmers and gardeners need to know when to plant to avoid frosts, and they need to know the schedule of plant and insect development to decide when to apply fertilizers and pesticides. Many interactions in nature depend on timing.  In fact, phenology affects nearly all aspects of the environment, including the abundance, distribution, and diversity of organisms, ecosystem services, food webs, and the global cycles of water and carbon.”

One might wonder how notes scribbled down in one era might have any impact or advice for later generations. Look no further than the early citizen naturalist Henry David Thoreau (1817-1862) residing in Concord, MA. From his daily walks, he kept detailed records of his observations of wildflowers, leaf-out for trees and spring bird sightings during the years 1851-1858. After making his observations, he charted the findings in tables. Fast forward to spring 2003, when the scientist Dr. Richard. Primack and his team begin walking the environs of Concord, following in Thoreau’s footsteps and taking their own observations. Primack’s findings and ongoing conclusions have been published in his book, Walden Warming: Climate Change Comes to Thoreaus’s Woods. By using Thoreau’s and other proximate naturalists’ records, Primack demonstrates that climate change and the warming of the planet is affecting the cycles of plants and wildlife.

“One thing that made Thoreau so effective as a thinker and writer was his ability to gain insights from observation in the natural world. If our goal is to protect the environment and deal with the problem of climate change, then part of our strategy should be for each of us to immerse himself or herself in nature in order to understand what we are trying to protect. At the most basic level, this means walking through natural landscapes and observing what is there; we should learn the names and characteristics of birds, mammals, plants and other species. We should observe their behavior, their migrations, and their seasonal changes, to better understand their and our place in nature. As we develop this understanding, we will become better advocates for their protection.”

The time is now. Start making notes about your natural world. Chose a method of keeping track. Perhaps, your approach will be similar to the poet Mary Oliver, and you’ll have a notebook always in your back pocket for jotting down fleeting thoughts and observations. If you are more comfortable in the digital realm, then download Nature’s Notebook app and log in. Birds are returning. Skunk cabbage will soon be showing its fronds. Don’t leave any natural arrival unnoticed.

Phenology as described by the USANPN website: https://usanpn.org/about/why-phenology. Accessed on 2/13/2017.