On a recent subway ride, I watched a woman crochet a colorful hat surrounded by riders tapping away at their ‘smart’ phones. Busy hands. All hands were indeed busy, but sometimes juxtaposition says it all. The woman will have an actual useful object to show for her time, but what can be said of the others?

Are we truly busy when scrolling through Facebook, Twitter or Instagram? Does one’s mind settle down as it does whilst knitting, as Cat Bordhi revealed in her essay, “A Guide for Bringing Knitting and Spinning into Elementary through High School Classrooms.” Secretly, she had her students knit and spin during her humanities class without first obtaining permission from the administration. When the district superintendent stopped by unannounced, her students’ hands were busy knitting, spinning or winding wool, whilst listening to an audio-tape. She feared repercussions, but the superintendent later reported “that what struck him first as he came through our door was that every single student was productively and positively engaged as a member of a thriving community of learners, and that he had rarely seen a classroom so attentive on so many levels: listening, working with the hands and helping one another.”

Working with one’s hands yields compound results. Monica Moses’ editorial in the February/March 2015 issue of American Craft cites multiple studies equating using one’s hands as a tool to combat depression. The actual ‘act’ of making not only brings happiness, it also fosters the human spirit. Stephen S. Ilardi notes “that people whose lifestyles more closely resemble those of our ancestors–for example, the Amish, who make their own furniture, sew their own clothes, and drive handheld plows–experience significantly less depression.” 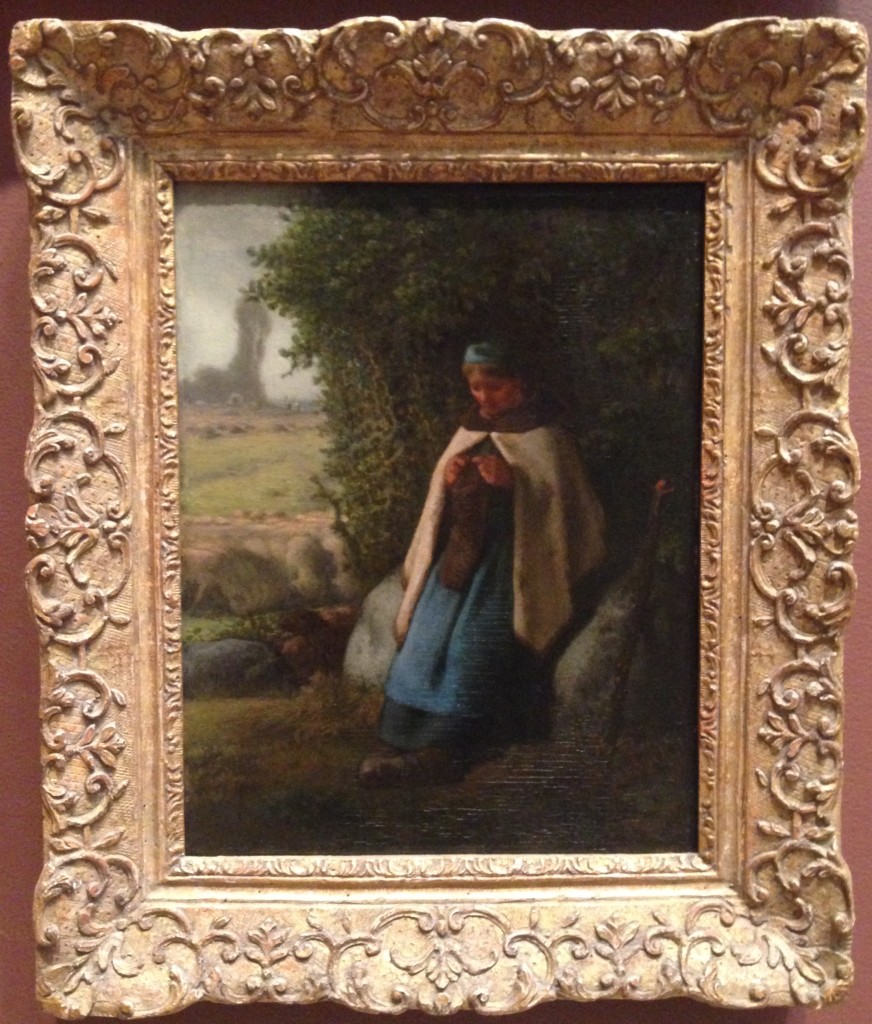 Knitting was a skill that both boys and girls learned in earlier centuries. Larissa and Martin John Brown report that in the late 1700s, villagers from Dentdale, England, men women and children, came together at the end of the work day for a “sitting.” They posit:

“It’s tough to imagine that world now, when you can buy a ten-pack of factory-made socks for a few dollars, but this was a time when the vast majority of socks, stockings, and gloves in the Western world were not just knitted, but knitted by hand. They were knitted because knitted fabric has properties of stretch, shapability, and seamlessness that make it superior to woven and sewn work for those garments. They were knitted by hand because knitting machines, though in existence from 1600s, took centuries to overtake hand production.”

My first major knitting project was a pair of socks on four DPNs (double pointed needles). I had no idea how to construct the heel flap and then turn the heel, but then found helpful resources and fellow knitters to guide me along. I had almost finished one sock and slipped it on. It was huge, so off I ventured to my local yarn store for a consult. Deb, the owner, confirmed that the sock was too big for me and too small for my husband. So as I gulped, we ripped it out and I started again on a circular needle. Now, thanks to her, I knit two socks at once and enjoy wearing my hand knit pairs.

Maybe someday, I will board a subway car and there will be a “sitting” going on — many of those in the car knitting or crocheting. What if more people started knitting their own socks, hats and gloves, not only to quiet the mind, but also to connect, with making and with others? Trust me, tucking a ball of sock yarn and a pair of circular needles in one’s bag is easy.

Cat Bordhi, “A Guide for Brining Knitting and Spinning into Elementary through High School Classrooms,” www.catbordhi.com accessed in July 2011. Her essay as well as a lesson plans may be found on her website. The lesson plans are a history of civilization told via fiber.