She was the daughter of Eliza & Nathaniel Peabody and is the first of The Peabody Sisters, covered in Megan Marshall’s enthralling biography.  Eliza Peabody ran a girls school and as reported, “At the turn of the eighteenth century, teaching was the highest calling a woman could respectively aspire to, but it was near the bottom of the scale for a college-educated man, generally a prelude to a career in law, medicine, or the ministry.”  At that time, young girls were taught rudimentary reading and writing, as well as more useful skills:  needlework, music, nursing, cooking, conversation, and etiquette. 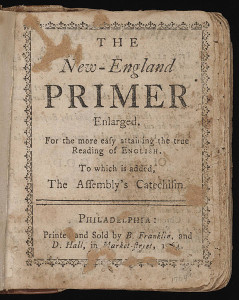 The New England Primer was used during the 18th century

Elizabeth Palmer Peabody followed in her mother’s footsteps and would later be recognized as the “founder of kindergartens in America.” In August of 1840, she opened West Street Book Store, and “filled the shelves with books in English, French, German, Italian Greek and Latin, selling at prices from 50 cents for pocket editions of Shakespeare’s plays to $65 for a handsomely illustrated forty-eight volume set of Scott’s Waverly novels.”   One could also join her lending library for a $5 fee. West Street Book Store would later serve as the meeting place for Margaret Fuller’s famous talks.